Home » Travels to the Sixth Dimension 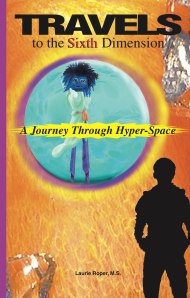 Travels to the Sixth Dimension……..

Jackson Elderberry Monroe was born with special gifts. He didn’t quite understand that he had accelerated codes imbedded in his DNA, and that’s why he could astral travel, leaving his body at will, see into the future, and even read people’s minds. This latter gift proved a huge help when dealing with the aberrant behavior of some of his school chums, and even his teachers.

Jackson became aware he was an “indigo” when he began getting visitations from his mentor-to-be, TeTe, so named because Jackson couldn’t pronounce TeTe’s real name. Voyagers from the sixth dimension, where TeTe hails from, have particularly difficult names to get your tongue around. TeTe improved Jackson’s abilities to travel through star gates and portals into other dimensions beyond the third, where Earth is situated, by taking hyper-space leaps and using effective orbing techniques. Most importantly, he explained about the interconnection of everyone and everything on this planet, and how your thoughts manifest the good, the bad, and the ugly you are experiencing, and that thoughts are made of quanta or energy packets which can be manipulated to attract anything you desire. He primed Jackson for taking his place as “holder” of energy, and a truly conscious human being on the precipice of taking his place in a world which desperately needs people of rare talents and compassion.

Jackson had many off-planet adventures, and is inviting you along to share some of them. Journey to the Sixth Dimension is a book which will be enjoyed by tweens, teens, and adults with the imagination to know we are multi-dimensional beings, capable of breaking through all our self-imposed limitations to discover worlds and intelligences way beyond earth’s third dimensional restrictions. Enjoy the journey, and learn how to develop some of Jackson’s talents.  http://www.amazon.com/Travels-Sixth-Dimension-Hyper-Space-ebook/dp/B009W8GNFC